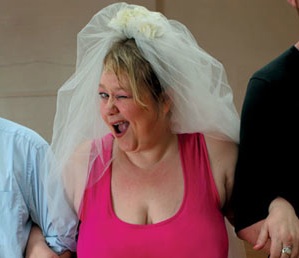 Sexy goddesses are certainly not size zero in this hilarious farce about the rise and fall of a small town diva and the two men in her life. Written by the acclaimed playwright Hanoch Levin, one of Israel’s leading dramatists, Ya’akobi and Leidental takes a comic and at times grotesque look at a love triangle in which two best friends fall for the same woman and her beautiful big behind.

“…wherever I turn, wherever I go, Bigtush will be there to impress!”

Using a physical, cabaret style, Tik-sho-ret’’s playful production includes live piano music and passionate songs. But underneath the laughter there is also a touching recognition of our universal need to be loved.

Presentations of Ya’akobi and Leidental to date (click on the links for production credits, cast and crew and for photo galleries):

One of the most established playwrights in Israeli theatre, Hanoch Levin was a major creative force in the development of Israeli theatre. Levin’s illustrious career spanned over 30 years with more than 50 plays to his credit, until his untimely death in 1999, aged just 56. His unique style has become an enormous source of inspiration for a generation of Israeli dramatists and his work continues to be performed in Israel and around the world to great acclaim.

In a cabaret style, Ya’akobi and Leidental one of his earliest plays, takes a comic and at times grotesque look at the love triangle between two men and one woman, all desperately trying to add meaning and excitement to their lives. The play was first performed in 1972 at the Cameri Theatre, Tel Aviv.