‘The Scapegoat’ rehearsed reading at the Jewish museum 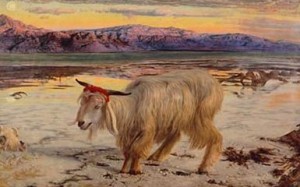 ‘The ‘Scapegoat’ by William Holman Hunt

Two sisters. Vivid reflections of their lives and conflicts. Art. Zionism. A neurotic young gallery curator. William Holman Hunt. And of course – a goat. Rehearsed reading will be presented at the Jewish museum.

The Scapegoat, a new play by Deborah Freeman, is inspired by the life and some of the ideas of William Holman Hunt, pre-Raphaelite artist and Victorian Christian Zionist.

Originally commissioned by Manchester Art Gallery, the play has had a number of successful rehearsed readings including one at the ‘Late at Tate’s’ series in London’s Tate Britain in December 2012 to coincide with their exhibition on the Pre Raphaelites.

This is the first reading of the play in full and the writer and director would welcome audience feedback to challenge and support the play in this stage of development.