5 Plays. A World of Stories. 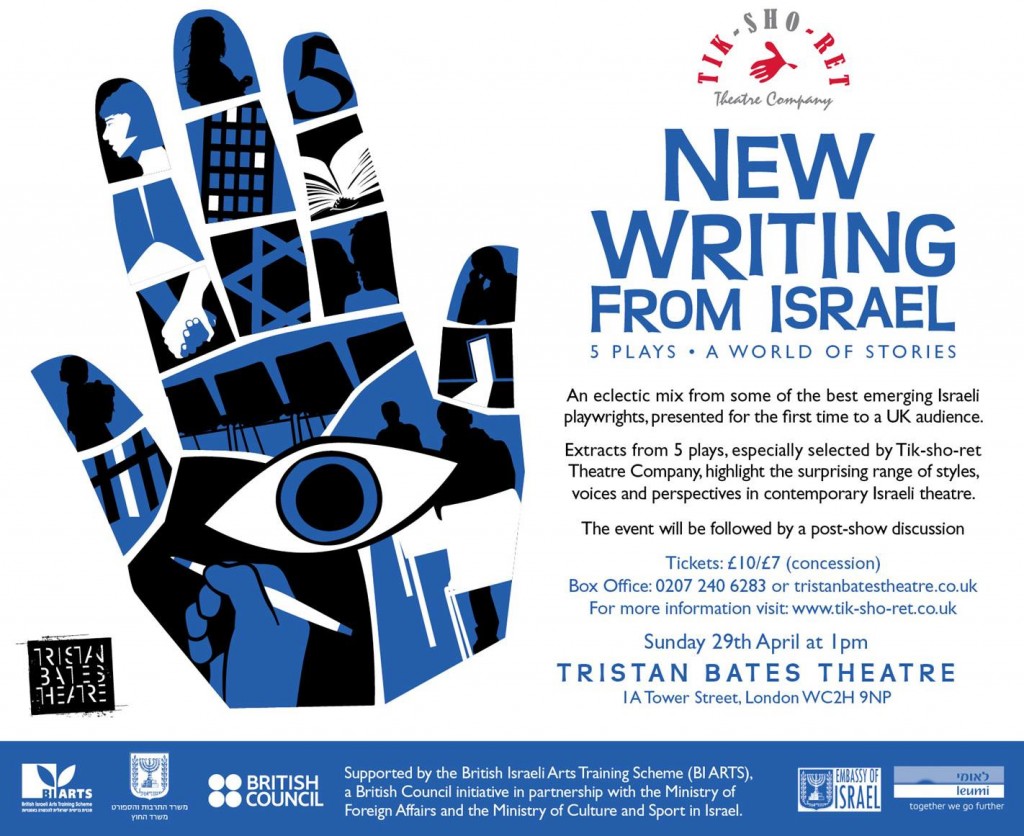 A weekend of collaboration between Israeli playwrights and British directors/actors, presenting works-in-progress showings of translated extracts of 5 Israeli plays to an invited and paying audience.

An eclectic mix from some of the best emerging Israeli playwrights, presented for the first time to a UK audience. A weekend of cultural and artistic exchange between British and Israeli theatre makers culminates in an exclusive performance of rehearsed readings, which will be presented at the Tristan Bates Theatre at 1 pm on 29th April 2012.

Extracts from 5 plays, especially selected by Tik-sho-ret Theatre Company, highlight the surprising range of styles, voices and perspectives in contemporary Israeli theatre. The event will include a post-show discussion with the writers, directors and also Roee Chen the Dramaturg of Gesher theatre in Israel and will be chaired by Matthew Lloyd (former artistic director of the Actors centre).

The Plays, Writers, Directors and Cast

Click on a play title to read more and watch videos:

Matthew Lloyd After graduating from Oxford University, Matthew went on to pursue graduate studies at Harvard and Columbia Universities. From 2002-11 Matthew was the Artistic Director of the Actor’s Centre. He was formally the Artistic Director of the Royal Exchange Theatre in Manchester (1997-2001) during which period it won the Barclays TMA Award for Theatre of the year. Prior to this Matthew was associate director of the Hampstead Theatre (1991-97). Matthew has held teaching positions at Harvard, Central School of Speech and Drama, Motley School of Theatre Design and The Slade.

Roee Chen Writer, translator and the Head of the Drama Dep. of Gesher Theatre (Tel-Aviv). Published two books as an author: “The Ink Horses”, 2005 and “Tel-Aviv Tales”, 2011. His short stories were translated in English, Russian, Ukraine, Yidish, and published in New-York, Moscow, Petersburg, Kiyv and Paris. His adaptations (Enemies, love story- Y.B.Singer‫; The Jewbird – B.Malamud, Six Characters in Search of an Author – L.Pirandello, A Pigeon and a Boy – M.Shalev etc.) were staged in various theatres in Israel (Gesher, Habima, Tmuna etc.) and in Russia (Sovremennik, Takoi Teatr). He translated poetry, prose, classic fiction novels and over 30 plays from Russian, French and English to Hebrew (Pushkin, Dostoevsky, Bunin, Gogol, Kharms, Moliere, Hatcher, Costello etc.).

We would like to thank the Tristan Bates Theatre and The Actors Centre especially Ben Monks, Will Young, Louise Coles, Roberto Salvatori and Miguel Figueiredo for their generous support, advice and use of venue for this event; The British Israeli Arts Training Scheme (BI Arts), The Cultural Department of the Israeli Embassy, Iris Ambor, Lark, Sharron Harnoy, The Institute of Israeli Drama, The Balint Trust, Bank Luemi, Sarah Scharf, Orna Salinger, Lucy Casson, Pimlico Academy and all the staff at the Wet Fish Café.

Supported by the British Israeli Arts Training Scheme (BI ARTS), a British Council initiative in partnership with the Ministry of Foreign Affairs and the Ministry of Culture and Sport in Israel.