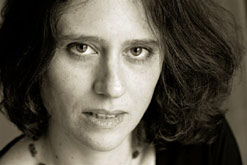 Ariella Eshed is an established director and workshop leader based in London. She formed Tik-sho-ret in 2005.

Ariella has taught, directed or led workshops at Mountview, East 15, Alra, Central School of Speech and Drama and the National Theatre Education Department. She is a regular tutor at the Actors Centre and at the City Lit and in Portsmouth University. She also led workshop Internationally in Athens, Sweden, Japan and in Israel.

Louise has worked within the drama industry for ten years, as an actor, producer and in script development. She has a particular interest in working with upcoming writers and has co-produced new plays at several London Fringe and off-West End venues, including the Hackney Empire, Stratford Circus and The Bridewell Theatre. Most recently, Louise has produced Open Page, bi-monthly new writing night for Stellar Network at the BFI.